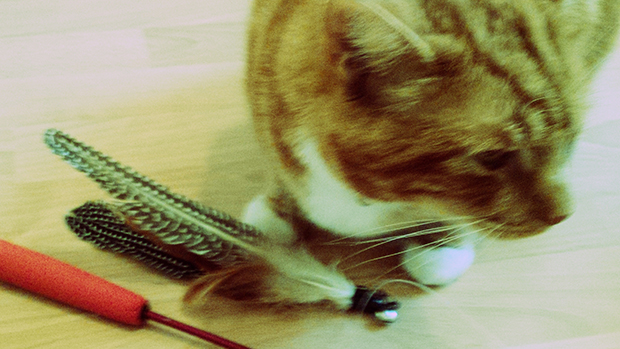 Kenward Elmslie was born in New York City in 1929. He grew up in Colorado Springs and Washington, DC and studied at Harvard University before moving back to New York City in the 1960s. He became a central figure in the New York School and promoted the work of fellow poets such as John Ashbery, Joe Brainard, Anne Waldman, and James Schuyler through his work as editor of Z Magazine.

Elmslie’s first writing experiences were as a lyricist and librettist, a fact which is still evident in his work which often explores the intersection of experimental poetry and musical theatre. In addition to his musical collaborations, he has also worked extensively with visual artists.

I highly recommend going on his website (enable pop-ups!) and having a listen on Penn Sound – his stuff is simply amazing!

My little poem below is a silly response to Elmslie’s “Feathered Dancers” and is strongly influenced by a recent new (feline) addition to my family.

On invisible string you tow me over Persian rugs and parquet
chuckling while he is chasing with razor claws.
“panem et circenses” he thinks of me as both, you think it’s okay
but I have holes now, a broken quill, crushed in his paws

I lost my feathers, my dreams, been pondering dying
I see Icarus’ fate drawing closer each day
still you drag me out again and again for the pleasure of the lion
I call it cruel, cynic, you call it play.